I didn't want to go to Milwaukee, honestly. I really thought that I didn't want to go. Too busy with mug orders. Didn't want to deal with the hassle of travel. Too expensive. Grump, grump, grump. About a week before I was to leave, Susan asked me if I was looking forward to going. "I can't wait!!!!!" I said, so enthusiastically that I surprised myself. Susan muttered "wrong answer" before leaving the room with me running after her telling her of course I would miss her while I was gone! But, the truth was, that the closer it got to NCECA, the more excited I became. For you see, I had arranged to take a semi private workshop with renowned clay and glaze expert Ron Roy, and this was the main attraction as far as I was concerned. All the rest of the conference would be fun, I thought, but having two days with Ron and a few other serious students sounded superb. And superb it was.
Ron has been a full time potter for 52 years now, and has written many articles and co-authored the best selling glaze book "Mastering Cone 6 Glazes". He is also active in the ClayArt group which is where I first came into contact with him. I have had the pleasure of working with Ron for a few years ever since he helped me switch from a problematic Laguna Clay body to a more reliable clay made by my favorite clay supply company, Clay Art Center in Tacoma, Washington. While I had learned a lot from consulting with Ron, I had never had the opportunity to take his two day course.
So along with a young couple from Sao Paulo, Brazil and a potter from Ann Arbor we found ourselves together with Ron for two days - three if you count the day after the glaze class when we had a free day and spent most of it together exploring the wonderful Milwaukee Art Museum and downtown Milwaukee.


NCECA (National Council on Education for the Ceramic Arts) is an annual conference that happens every year in a different city. I have only attended one NCECA previously, which took place in Seattle in 2012.

When I was at NCECA Seattle, for one reason or another, I did not go to the event on the first day as there was nothing big on the schedule other than the keynote speech. Bad choice! As I learned, the first day is the day that you want to go to the vendor's hall and spend hours talking with vendors, looking at clay tools, meeting old friends and picking potter's brains. Once the individual education sessions start, you find that there are so many that you want to take part in that you really don't have much time to get a relaxing visit in at the vendor's area.
That evening the keynote speech was given by Theaster Gates who spent some of the keynote as well as his time in a round table discussion the following morning imploring the inclusion of more people of color in future NCECA conferences. It was interesting and thought provoking and I find myself even now thinking about the message he gave. I hope that NCECA puts his talk up on their youTube site as I would like to see it again and so that folks who missed it can take a look for themselves.

There were tons of demos to watch. The hall that was dedicated to demos was always packed.
The big highlight for me is seeing the National K-12 Ceramic Exhibition. It is absolutely amazing what is coming out of some of the classrooms across the US. As a former teacher, (though not in an art related field) I know that there are some incredibly dedicated teachers out there sharing their passion for clay with our youth.
I went to a round table discussion about social media and potters with Ben Carter, Carole Epp, Adam Field and Michael Kline. Michael posted the photo below which got a huge laugh from the audience. I used to spend a lot of time on Twitter and Facebook but over the past couple of years I have found that I have to be in my studio for a minimum of eight hours a day in order to meet my deadlines. I bet I don't spend more than an hour a month total anymore on social media. When Adam said that he actually spends more time on social media than he does in his studio, I thought about getting up and leaving but it was right at the end of the session! Unfortunately they did not talk about privacy and how photos posted on the various sites no longer belong to them, and they seemed to think that making a connection to their customers helped them make sales. Which is nice to think, of course, but in my experience a lot of the followers of potters' social media sites are other potters who are a) broke and b) looking for tips on how to make pottery. My philosophy is to let my work speak for itself and let others do the talking about it if they want to - I don't have time or the interest to keep trying to figure out a new way to talk about coffee mugs. While it works for me, your mileage may vary :) As Tom Waits says, "Those who know aren't talking, and those that don't know are diving across the table for the microphone". Not that I know something and Adam doesn't...I just have little choice but to work if I am going to pay my bills. 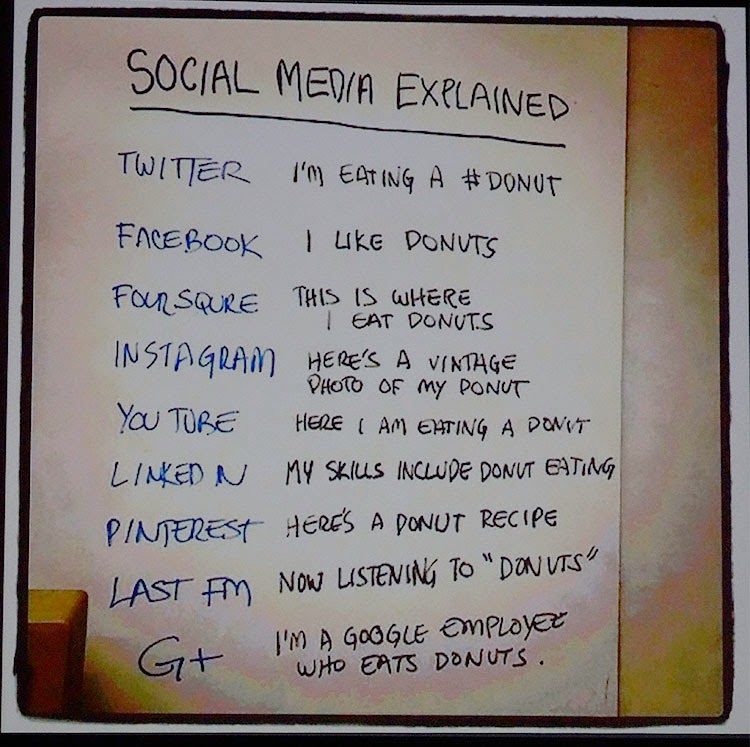 One of the great things about NCECA is the chance to connect. Not virtually, but in real life. Shaking the hand of a real person, hugging a real person, exchanging ideas with real people. Making friends. Spending time with friends. Ahh. This to me is the joy of this conference, the life of this conference, the essence. And to spend a week with nothing but clay, clay, clay and people who are passionate about it - well, that's about as close to heaven for a potter as you can get! One night I had dinner with Steven Branfman, John Baymore, John Jessiman, and Lisa Floryshak-Windman among others. I don't know who brought up the subject of "What's the biggest kiln explosion you ever saw" but let me tell you, that was a fun discussion!
Mel Jacobsen gave a stirring eulogy to Nils Lou who passed away late in 2013.

I watched an interesting round table entitled "Where have all the potters gone?" I found it ironic that in talk after talk that I attended, speakers said "I hope you have done a financial calculation so that you know how many mugs you will have to make every month to pay your bills". They always say this as though making a mug is the absolute worst thing that you have to do, but you have no choice if you are going to make a living working in clay. I guess I'm the luckiest potter on the planet as I absolutely love making mugs–and yes, I know exactly how many mugs I need to sell each month to pay my bills! And, just as a side note, I am curious as to why at these presentations, often references are made to Laguna Clay, but the speaker will never reference them by name. Tony Clennell said something to the effect of "You know the company that makes the clay body that starts with a letter and ends with Mix -that company. They make x million pounds of that clay every year." Why the secrecy? Is Laguna going to come after Tony and put him out of business if he says their name in public?
I had a wonderful lunch with Mel and his young protege Colleen Baillie, who is a junior majoring in ceramics at the University of Minnesota and also refers to herself as Mel's apprentice. I was thrilled to get her mug in the mug exchange in the ClayArt room. I look forward to seeing her work unfold in the years ahead - she is one talented young potter!
I stayed at a wonderful house I found through airbnb and miss my new buddy Reggie who lives with a great group of people who were kind enough to let me stay with them for a week at their house on East Potter Avenue. (The address is somewhat fantastic for a potter, doncha think?) The people of Milwaukee are among the friendliest group of people I've ever met. I really enjoyed getting to know the city and I hope to go back some day. I have, however, made a note to go back when the weather is warmer!


I saw this post on ClayArt this morning by Mel and I think he sums up the NCECA experience beautifully:

remember, if you dig a bit, you can find almost anything
at nceca.
it is a vast array of many things...big, small, good and bad.
it is never one thing.
it is always hard to judge the total.
i am impressed that it gets done so well.
we get around, get informed and get on buses.
the programs start and end.
you can find a few good, a few bad.
there are many ages, many talents and lots of
great folks that love clay.
what more do we want?
i always have a great time.
and, i love to piss about bs clay work. it is a part of my dna.
i am a functional potter, part of the `really old school`.
so.
my heros are mostly dead.
and, i hated not having malcolm davis and robin hopper and
the good old boys around.
those that did not know them on a personal level really
don't care.  they are the past.   robin will be with us again soon.
i have spanned all the ages of american clay from voulkus, to shaner
to mackenzie, to ferguson and many more.
soldners antics at nceca are legend.
i miss the characters.  they laughed, got drunk and spewed on
all of us.  mostly in good will and humor.  it is a politically
correct world now,
serious..many
will not react to the hilarity of being a potter.  we are a funny bunch.
we are sort of `low brow`.  we like clay in our pants. and, we adore
wonderful pots.  it matters not who makes them..just that they are made.
mel

As I made my way from the Wisconsin Center after Cynthia Bringle's wonderful closing lecture and slide show, I walked along Water Street to the bus stop where I would wait for the airport bus. Being in no particular hurry, I found a lovely little pub to have one last lunch in Milwaukee. As I made my way back to Water Street, I saw this and I thought to myself, with a big smile on my face, thanks Milwaukee! 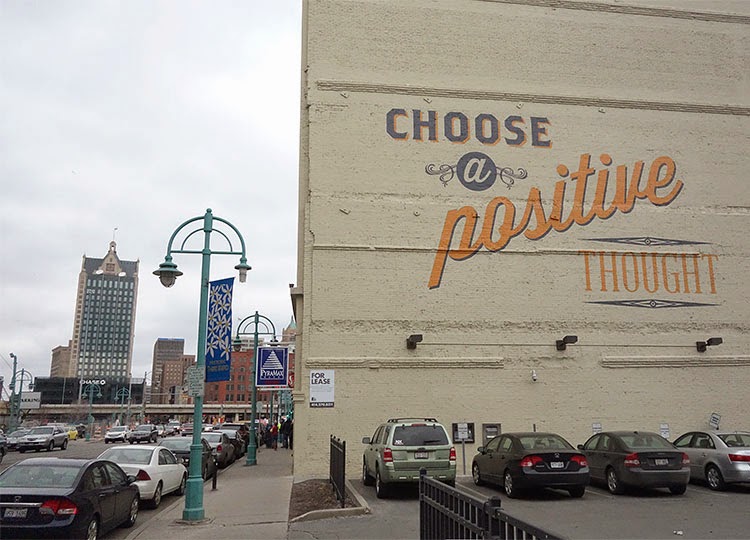