The Coolest Mom Ever! 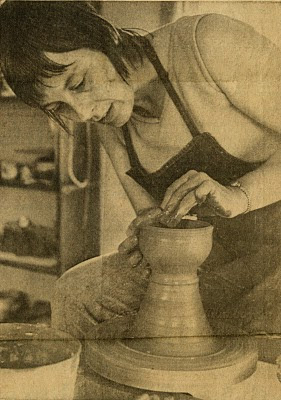 I've written a bit about my memories of my mom's pottery previously in the blog. As today is  Mother's Day, I wanted to share a bit more about my mom's life with clay.

I asked my mom how she got interested in pottery, and she said "I went to an art sale with a friend just before Christmas in the mid 1960's. We walked around, and for some reason, I picked up almost every piece of pottery and hugged them to me, asking my friend if she didn't just love it like I did. Before the evening ended, she gave me a rather strange look and said "why don't you take up pottery?" I'd never thought of it as an option before then, but it was a great idea, given my sudden love affair with things ceramic, and I immediately signed up for classes.  My interest in working in clay soon transformed from a love affair to an obsession." 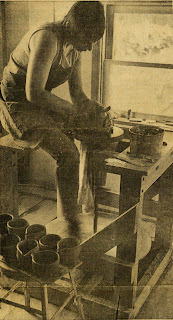 Mom spent eighteen years making pottery, first as a part time hobby, and later on, full time. I recall many street fairs, open houses, and gallery shows where she sold her work.

Mom did all her throwing on a kick wheel, and not only made a full line of functional pottery but also made pinch pots and did some very cool slab pieces. In a lot of ways, her artistry was ahead of her time. Her favorite functional pieces to make were teapots and bowls.

Of her non-functional work, she says "After I spent a summer at the Banff School of Fine Arts, I developed a love for throwing slabs of clay across a table to thin them and at the same develop a rough texture created by the act of throwing the clay across the table. The texture was very similar to tree bark, and I fired the pieces without glazing them, only using an iron wash to stain them.   I then created wall hangings using these pieces interwoven by jute macrame (that I also executed).  Unfortunately, I was a little ahead of my time–most people didn't understand the beauty I was creating, and a common question about many of my free-form pieces was 'What is this for?' Today I don't believe this chasm would exist."

I asked her if she had any noteworthy things that she recalled, and she said "I once built a clay chair which I thought was pretty spectacular. It was burnished and coated in a black slip. Unfortunately, it fell apart the day we tried to place it in the kiln. It was going to have some cords strung back and forth, upon which to place a cushion made from some handwoven fabric. I was very sad that day, after spending a great deal of time constructing and burnishing it." 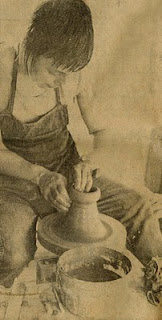 When we lived in Windsor, Ontario, her studio was in our basement. In 1972 we moved to Sebringville, Ontario (near Stratford), where her studio was in a converted chicken shed, under had a huge black walnut tree, and there was a showroom in our house in what had once been the summer kitchen. We lived in a fantastic house that was built in 1834, and our three acre property had a beautiful creek running through it.

We met all kinds of interesting people over the years due to mom's involvement with clay. I recall a couple from France who were hitch-hiking through Canada. They saw the pottery sign in our front yard, came in to see the showroom, and ultimately became good friends. We also got to know a wonderful couple from Austin, Texas, who helped fire Mom's wood kiln on one or two occasions. As a kid growing up in rural Canada, meeting people from Texas was off-the-charts exotic and hugely entertaining, with comments like "Y'all ain't lived yet if you ain't eaten jalapeno peppers" being particularly fascinating. There was a full blown music centered hippie-commune known as The Perth County Conspiracy nearby and we got to know many of the colorful characters who lived there.

Over the years mom went to many workshops with well known potters such as Robin Hopper (with whom she also apprenticed briefly), John Glick, Finn Lynngaard (from Denmark), Michael Cardew, Roman Bartkiw, and an unforgettable week with Tatsuzo Shimaoka, a living national treasure from Japan. She also attended the Banff School of Fine Arts for six weeks in the summer of 1970 and won a tuition scholarship there to return the following year.

Though mom is now retired and doesn't work with clay any longer, I do get her into my studio when she visits, and it's always a thrill for me. She knows a lot about glaze formulation, and one of my prized possessions is a box filled with her glaze tests and recipes. In fact, one of the glazes I use on the mugs is from one of her recipes. She's an excellent photographer and we love to go out and shoot together. She's probably noticed that I wait to see what she's shooting out of the corner of my eye, and then I take the same shot a few minutes later when she's not looking. Her shots always come out better of course!

I've been really fortunate to be able to make a living as a potter, and I know my mom is both thrilled, proud and happy for me. I know that I would never have been able to do it had she not shown me how important it is to follow one's passion, work hard, and do good work. I'll never forget her telling me not to be afraid to make my pots really well, and to price them accordingly, because there are people who value really well made pots.

Thanks mom, I love you! Happy Mother's Day! 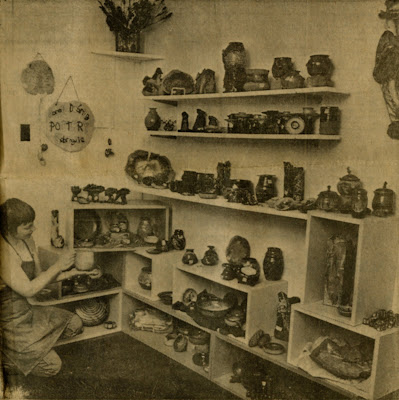 All the photos are scans from a 1970's local newspaper interview, published in Stratford, Ontario.
Posted by Owen at 7:37 AM 8 comments:

I had some t-shirts made for Mug Revolution a while back. I planned to offer them for sale on the website. I haven't gotten around to doing that just yet– I always seem to be busy doing something else, it seems! I've given a lot of them to family and friends, and I give one away from time to time when I get really big orders. Everyone loves them.
The other day in the studio, the thought occured to me, why not give away some t-shirts in a contest? So, dear reader, I am offering you the chance to win one of these very cool tees. 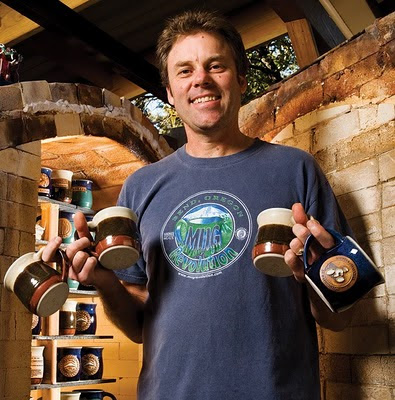 How do you win a t-shirt?
It's simple. Just reply in the comments to this blog post and state why you deserve to win one. Nothing simpler!
I'll keep the contest open until Thursday, May 27th and pick winners on Friday May 28th barring some unforseen incident. If I'm really impressed by your argument in favor of winning a t-shirt, I may be pursuaded to add a mug to the t-shirt. So impress me!
There may be more than one t-shirt awarded. There may be many. At the moment I will be the sole judge, though I may call in one or more additional judges, especially if they provide the beer coffee while we choose. ;~)
Let the writing begin!! Good luck!
Oh! If you'd like to post your entry on Mug Revolution's Facebook fan page (where you can add photos and videos if you want) here's the link!
[UPDATE 5/29/10]: Winners announced!
Posted by Owen at 7:56 PM 17 comments: