This blog is no longer active. I have started a new blog and hope to find time in the future to add more posts at the new location.

Yesterday morning I received an email from a friend up in Ontario, Canada. She had just seen the movie "I'll See You In My Dreams" which just came out to theaters in the last few weeks.

So I did a little digging on the web search engines. I found out that indeed my mugs are in a major movie. Pretty cool! I have no idea how those mugs came into the hands of the movie studio and subsequently found themselves being used in a scene featuring Blythe Blanner and Mary Kay Place.

I wonder how those mugs got there! A couple of years ago I recall sending a box of small mugs (the same size mugs that are in the movie) to a commercial production studio in Los Angeles by express service, to be used as props in a AmEx commercial that was supposed to air nation wide. So I wonder if those mugs went into a prop storage facility in Hollywood, and someone saw them and thought they would be good in this scene. Who knows, though. I sell a lot of mugs. I never did see that commercial and don't know if it was ever made or aired.

At any rate, here is a screen capture and link to the clip where the mugs appear. I don't know if there are other scenes as I have not seen the movie yet.


There's a 30 second commercial you have to suffer through to see the clip. (That's what the mute key was designed for!)

Thanks to Lakshmi for tipping me off, and if anyone knows someone who knows someone, and can let me know how these mugs ended up in a movie I would be thrilled to find out.

I do wonder if Sam Elliot, who also stars in the movie has anything to do with this. He is seen from time to time around Central Oregon and I know that a mutual friend gave him one of my mugs a year or so ago. Who knows? Anyone?

I tried really hard to get hold of the production company to see if they would both a) verify that the mugs in the movie were indeed made by me and b) tell me how the mugs ended up in the movie. One of my e-mails got to someone who knew someone! And now, the mystery is solved.

I just received the following e-mail:


Owen-
I'm happy to hear that you saw our film! I purchased these mugs from you a couple of years ago for an AMEX commercial (remember we had to pester you for overnight delivery).
Anyway we ended up not using them in that spot, but they did end up being used at my house...;-)
When it came time for me to design this film I pulled a lot of personal belongings to use as props because of the nature (budget) of our little movie.
I think they add a lot and I'm happy that you noticed.
Thank YOU for making such amazing mugs.
Cheers
Eric

So, mystery solved, and my wife, who is a huge fan of Gwyneth Paltrow is thrilled that Gwyneth's mother Blythe Danner used one of my mugs.

Harrison Ford also has one of my mugs but that's a story for another day. 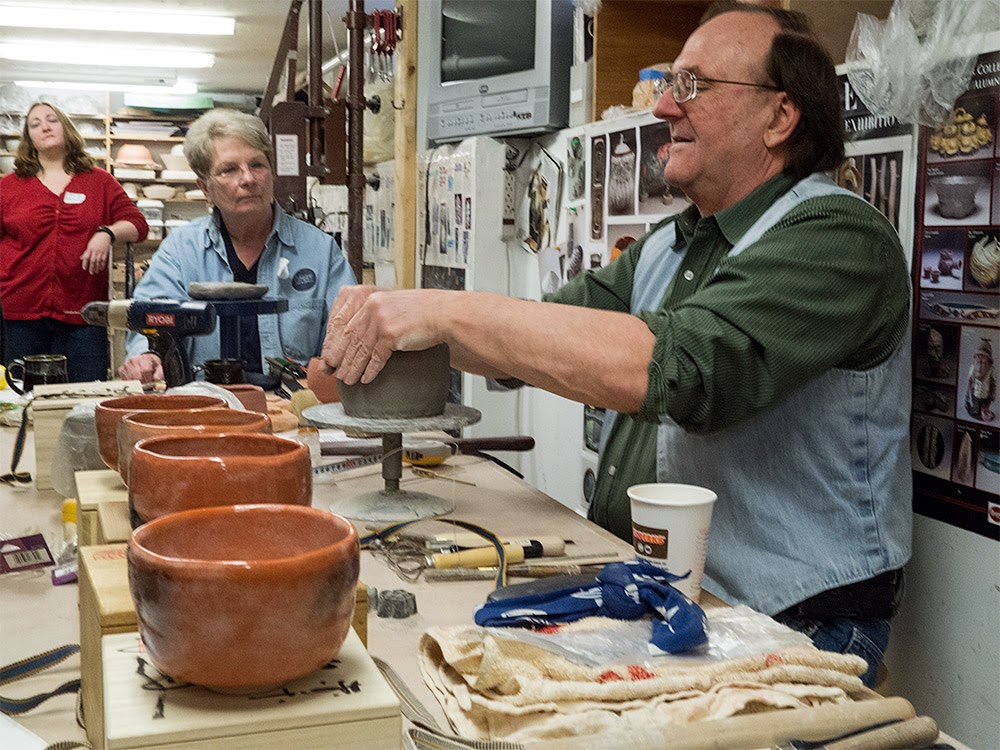 I had the good fortune to attend a pre-NCECA workshop led by New Hampshire potter John Baymore recently at The Potter’s Shop in Needham, MA – a great place to hold this workshop.

The focus of the workshop was “Making Handbuilt Aka Raku Chawan”, a subject that I knew very little about. Spending two days with John gave me a whole appreciation of the long history of the tea ceremony in Japan, and the esthetics that go into producing a tea bowl. And, I have a whole new appreciate of the art not only of making a good Chawan (tea bowl) but of how the tea bowl is used in the traditional Tea Ceremony which dates back to the ninth century.

The odd thing about Chawan, at least to a westerner, is that the tea bowl is not perfect in any way. It has irregularities from top to bottom. Nothing is symmetrical. And yet in Japan, each and every part of the chawan is done to perfection in the context of imperfection. Does that make sense? I didn’t think so. What I think it means to me is that the very fact that the tea bowl is imperfect can in fact be interpreted to be perfect…but, only if it meets the many criteria for perfection. For something that looks so organic, there are a tremendous number of considerations that must be taken into account. And, there are a fair number of contradictions that occupy the considerations.

On day one of the workshop, after a slide show which introduced us to John and the topic of the Japanese Tea Ceremony (Chanoyu), we each spent the day making two tea bowls. We learned that the effect we were after in our fired pieces, carbon trapping in an iron slip, would be achieved by placing the bisques tea bowls in an intermediate charcoal firing, then raku fired in the traditional manner which involves no post firing reduction.

The Chawan is the tea bowl that is used in the Japanese Tea Ceremony (Chanoyu). Our class had the experience not only of making Chawan, but also we spent an entire day taking turns participating in the Tea Ceremony as both the server and the servee. The ceremony is a very tightly scripted, deliberate, graceful, delicate dance, of sorts. At first I wondered why we were not spending time in the studio actually making Chawan when I realized we would be spending the day practicing the tea ceremony. But as the day went on I realized that without experiencing the ceremony, it would be impossible to make Chawan. If you don’t know how the vessel is going to be used, you really can’t make the vessel.

The bowls are formed using a technique I have never come across. We weighed out 1 kilo of clay (2.2 pounds), and after wedging, we made a ball of clay and then flattened it into a thick pancake, about 1/2-3/4" thick. The clay was then placed upon a banding wheel and the clay rolled up towards the maker, while the banding wheel was rotated around. It was somewhat like forming a pie crust. We were using the Golden Mean as our guide to the measurement of the tea bowl. In our case we wanted a bowl that was 13 cm wide and 9 cm tall before firing.

Once we had the height and width worked out, the bowl was then shaped into more or less the final shape. At this point, in one's own studio, the bowl would be left out to dry to the leather hard state. For the purposes of the workshop and the limited amount of time we had, however, we used propane torches to speed up the drying process.
Finally, the bottom of the bowl is paid special attention to. From John's handout: "When all the tea has been drunk out of the bowl, a small bit of the froth and liquid matcha (tea) will always remain in the bowl. The manner in which this left over tea pools in the bottom of the mikomi (interior of bowl) is considered aesthetic conundrum. A deliberate depression is often placed in the bottom that causes the tea to pool in an interesting way. This is called the chadamari or "tea pool".

While we were performing and learning the Tea Ceremony, the tea bowls we made the day before were bisquing away in the bisque kiln.
The following day, which unfortunately I was not able to attend, the pots were first fired in charcoal for the carbon trapping, then fired in the raku kilns.

I had a fantastic time with all the wonderful folks who took part. It was a real pleasure to get to know John Baymore a little. He is an absolutely wonderful guy, and his knowledge of all things clay and in particular Chanoyu is vast. If you get a chance to take one of his workshops, GO!

"Like traveling down a country road, a single piece may have many different landscape views revealed as you "travel" with the piece. The best Chawan encourage you to take this journey and show you new sights for years to come." –from class materials provided by John Baymore.

Thank you John for such a fantastic experience. I've only just scratched the surface of this most amazing form in pottery and hope to spend some time working on Chawan in my own studio.