On the weekend of February 15, 2014, a few very lucky potters were able to spend two days with Inayoshi Osamu, a potter visiting from Toyohashi, Japan.
Filled with a playful sense of humor and an amazing talent, Inayoshi spent two days showing us his very unique method of creating pottery, the results of which are stunning. Many of them look like rocks you would find while hiking. Yet, upon closer examination, you start wondering. How was this made? What is this? Who made this? I want to meet this guy!

Prior to his arrival in Bend, Oregon, I had spent some time looking at images of Inayoshi's work on his website and honestly I was stunned. However! I have to say that the only way to truly appreciate the genius in his work is to "see" each piece while holding them in your hands. The eyes give you one interpretation; the tactile feel give you another. Put together, you fully "see" the piece. But, don't let that stop you from looking at photos! Just try to get a chance to hold a piece - the rewards of the visual and tactile senses put together create an amazing experience.


Most potters fire their wares twice before they create a finished piece. I had the pleasure of drinking out of one of Inayoshi's tea bowls that had been fired eight times, for fifteen hours each firing –"until it looked right" which was the answer I was given when I asked why so many firings.  His firings start with a traditional bisque and then he will do between one and seven glaze firings, at ranges between cone 1 and cone 7. He gauges the readiness of the kiln being done by the look of the pot in the kiln. He does not use cones. I for one would be completely lost if I did not use cones for my firings. What is going on here?

Inayoshi's studio in Japan is unique: right behind the studio there is a clay deposit that contains seven different clays. He processes his clay the old fashioned way, with shovel, wheelbarrow, and buckets. He laboriously cleans and mixes his clay until he gets the desired body for the work he is creating. However, for his workshops in Oregon, he used commercially prepared clay. In order to get the texture he wanted, he wedged about 10% sand into the clay.

The larger items were prepared prior to the workshop and left overnight to dry.

Inayoshi prepared his trimming tools for use the next day.


The next day, Inayoshi showed us his unique techniques of working with wet and leather hard clay. Unlike most potters who hand build using either the coil technique or pinch pots, Inayoshi developed a way to work with solid shapes of clay which allow him to use natural objects to impress patterns without deforming the shape of the piece. In the photo below, he is cutting a small football shaped piece of clay in half after having made the patterns, which will become sake cups.

While the sake cup forms set up to dry, he started making a tea bowl. This is done using a wooden mold, over which a piece of material is placed to keep the clay from sticking to the wood. He presses the clay onto the mold until it is about 1/2" thick (1.25 cm), and then uses rocks, pine cones, corn or anything that he has found to press texture into the clay.


While the tea bowls set up, Ina scoops out the interior of the sake cups so that they are about 1/2" thick.

A row of tea bowls, which were formed on a wooden mold, setting up prior to trimming.

While the tea bowls set up, Ina scooped out the bigger pieces.

When we arrived for the second day of the workshop, the pieces that Ina had started the previous day were leather hard and ready to be finished. Inayoshi started by trimming the bottoms of the sake cups. 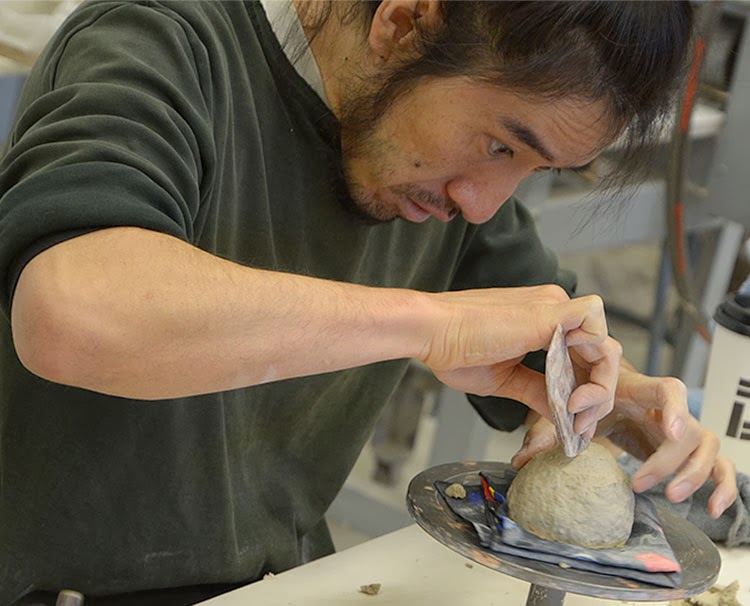 And then he used his trimming tools to thin out the walls of the tea bowls, sake cups, and bigger pieces. When done, the tea bowls and sake cups are incredibly thin with an amazingly precise uniformity of thickness. They are an absolute pleasure to hold and use (and that ain't the sake talkin' neither!)


The larger pieces were sliced in order to allow for Inayoshi to evenly thin the walls with his trimming tools. Here he has joined the two pieces back together. When he is finished you will not be able to see the seam. Even the interior seam is not visible - details like this are the mark of a true craftsman.

One of the wonderful things about this workshop was the informal nature of it. And, we got to work on our own pieces. Much laughter was had and I am finding that as the days and weeks go by that I have been inspired on deep levels not only by the techniques that Inayoshi Osamu has originated and shared with us, but also by his joyous personality. I am now seemingly cursed in such a way that every time I go out for my walk that I find myself scanning the trail for rocks to take home. Susan and I were happy to have hosted Inayoshi for four nights which gave us more time to laugh, share stories, and enjoy each other's company. Inayoshi is planning on coming back to Oregon in 2016 to do more workshops which will include glazing and firing the pieces he created while here. I can't wait!

The more I work with clay, the more I feel that it is all about the glazes and the firing. By that I mean that there comes a point in time when you become competent with wet clay and your interest turns to the composition of clay and glazes and learning different firing techniques. While this is not true for every potter, some of you out there will recognize a bit of this in your own development as a potter. So, as much as I enjoyed seeing and practicing Inayoshi's techniques of forming clay, I am very, very curious about his glazing and firing process. Ina told me that he is constantly testing glaze recipes and has many, many failures. But occasionally a glaze works, more often than not to fail in further developmental tests. But when one works!!! He and I understand each other perfectly on this level - it's all about that feeling of victory, satisfaction and blessing from the pottery gods that is so sweet, so compelling, and so addictive. So - for as much as I learned in the workshop with Inayoshi (which was a LOT) I feel that this is only the tip of the iceberg in terms of the knowledge that Inayoshi has, and I hope in time to learn more from this great potter.

Inayoshi Osamu: You are to pottery as Neil Young is to music.

Thanks for coming to Bend!