Just Mugs and Just a Barber? Not! 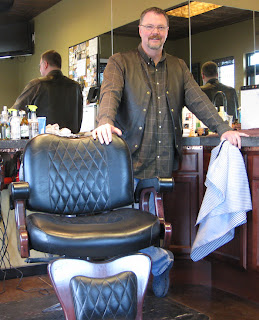 This is my barber, Bill Carpenter, here in Bend, Oregon. His shop is called "Just a Barber". It's just a little misleading, the name of his barber shop. He's a lot more than just a barber, though he doesn't want you to think that–he's pretty modest. You see, not only is Bill the kind of barber who knows everyone and can talk about almost any topic with some authority, but he and I have a little secret that I'm about to share with you.

He gets mugs from me. 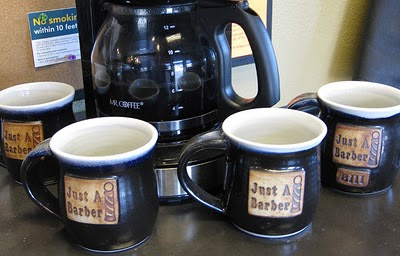 And every 6 weeks or so when I go in, both for a good conversation and a trim, I see these mugs and I think about how dang cool that is.

We typically have far ranging discussions as he is doing his work to make me look less shaggy. For instance, today we talked about the following things over 25 minutes: bicycle racing, baseball, local fall elections, Christianity, Buddhism, the dynamics of person-to-person versus group-to-group relations, psilocybin, Hawaii, oversized hail, riding bikes on the old McKenzie Highway, swimming versus walking the butte, personal responsibility, and a bunch of other stuff I can't remember. During that time he had two phone calls and one walk-in for appointments. All the while he's working on the old mop-top.

Each fall he usually asks me to make him some personalized logo mugs to give to his clients at Christmas. Last year he wanted shave mugs made. They were a big hit, he tells me. 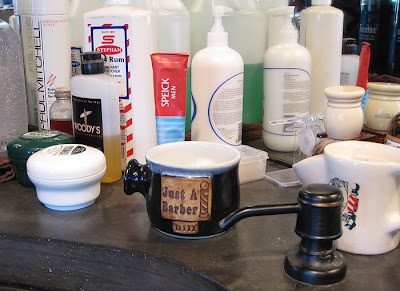 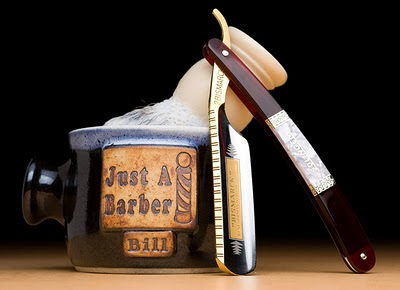 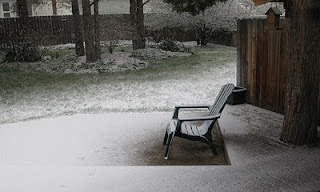 We've made it to April. In Central Oregon this means that the most unpredictable weather month of the year has arrived. You never know what it is going to be doing outside, and after six months of winter you can't help but feel that you are owed some nice weather. You get a really nice day or two, which gets your hopes up. Bad mental error, that. Because normally you can't count on good weather until June.

Meanwhile, things are chugging along in the studio. I had a late rush order that came in last Friday, the last possible day for orders to be added to this batch of mugs. These mugs are for a running race in Olympia, Washington. A very cool logo, I must say. 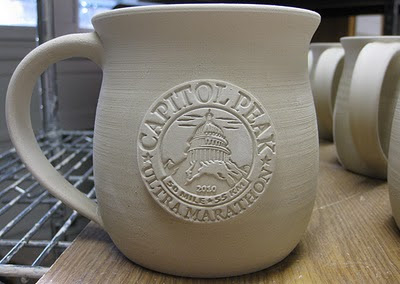 The Captiol Peak mug, greenware.
I should finish up the last of the logos and handles today, and will start glazing tomorrow. Actually I will start the first of two days of applying wax and wax resist to the mugs tomorrow, then I will start glazing. Hoping to get the kiln up and running late in the day on Friday.

Of course, since we are in April, I couldn't resist (no pun intended) a little April Fool's Twitter fun. Read from the bottom up to get the chronology correct. 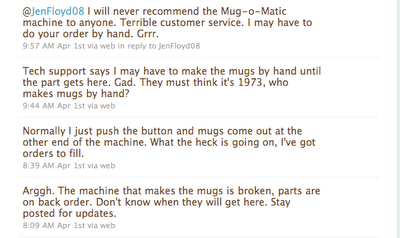 That's all for now–wishing you all the best until next post! 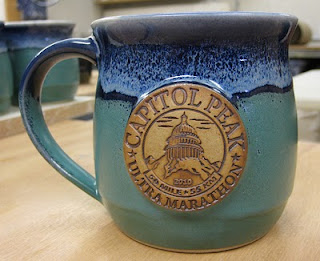