After spending four days in Seattle last week at NCECA, I had a couple of days to really relax. I also had one last thing to look forward to prior to coming home to Bend, Oregon - a Kathleen Edwards concert in Portland! I've been listening to Kathleen's music for a couple of years now and really enjoy her songwriting, singing, and musical ability. When I found out that she would be in Portland a couple of days after the clay conference, I was more that happy to adjust my schedule!

I didn't just plan to go to the concert, however. I had discovered that Kathleen is a regular Twitter user and I thought that it would be a nice way to thank her for her great music by giving her a Twitter mug. So, I made this mug and showed it to everyone who stopped by the studio. Given that not many around here know who Kathleen Edwards is, (she is pretty well known in Canada and has a loyal following in the US) my enthusiasm for this mug resulted in looks of concern for my mental well being from my family. (That all changed after we saw the show - as I knew it would.)

The show was held at the venerable Aladdin Theater in Portland. A few hours before the show was to start, I wandered around the back of the theater and gave the mug to Ryan, one of the stage technicians. We chatted a bit and had a laugh as we realized we had both been born just a few miles from each other in Southwestern Ontario. When I showed him the mug he said "Kathleen will really like this!"


A few hours later Susan and I met up with our daughter and her beau and together we took in the show, which was jaw droppingly good - this one goes down as one of the top shows I've seen over the years.

After the show, I wandered around the back of the Aladdin, hoping to say hi to Kathleen. Gord Tough, the guitarist, and bass player John Dinsmore were there. I thanked them for a great show and mentioned that I was hoping to meet Kathleen, and that I was the guy who made her a mug. Gord said "She was drinking tea out of that mug before the show, it's really nice!" I asked if they would mind if I hung out, was told no problem, but that it might be a while before Kathleen came out.

While I was waiting, a thought occurred to me and I pulled out my phone and pulled up the photo of Bono holding a mug I had made for him. I showed the photo to Gord and John who both said "Holy shit - is that Bono?" And then, Gord said, "I'll go see if I can find Kathleen," and he disappeared inside the Aladdin. Thanks Bono!

A few minutes later Kathleen came out and I had the pleasure of chatting with her for a couple of minutes. The best thing I could come up with for her to sign was a Canadian five dollar bill which I had put in my wallet some time ago. I thought this was kind of cool in a Canadian sort of way.

So far, mugs for Bono and Kathleen Edwards. Who's next?

[Update 9/30/2012] I just saw this photo and had to post it here, Kathleen posted this photo of the mug recently on her twitter feed - I'm glad to see it is getting used! By a rock star!! 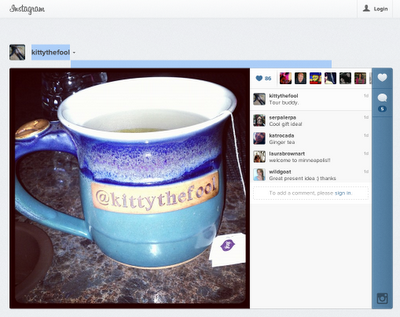 I've just spent a few days in Seattle at the NCECA conference. NCECA (National Council on Education for the Ceramic Arts) has a conference each year during the last week of March, in a different city. I figured that Mug Revolution needed to be present for this occasion, and since there was only one employee to choose from to go, I volunteered.

I have not attended an NCECA conference before, and was unsure of what to expect when 4,000 potters from all over the world get together in one place for a few days. Happily, I was super thrilled with my experience. I made several new friends, connected with several of my pottery friends whom I haven't seen for a while, and met the good Clay Art Center folks from whom I buy clay and supplies. Nice to put faces to names! I saw many exhibitions and attended a good many excellent educational presentations.

I met many folks whose names I was familiar with, but whom I had never met in person in the Clay Art room. Getting a chance to show glaze tests to glaze guru Ron Roy (while Mel Jacobson cheerfully added his two cents worth until we shooed him away), and meeting Hank Murrow were highlights.


It was pretty overwhelming, really. I barely took any photos at all - I kept busy absorbing good vibes, good friendship, and took in a lot of sights of the incredible pottery on display. One wonderful exhibit showed off the best of student pottery from the K-12 level, and emerging clay artists from the college level were also showcased. There were some incredible pieces on display. Lots of good stuff!
There were many, many exhibitions related to the NCECA main conference, held in venues in and around Seattle. Clay was alive in Seattle! I'm looking forward to getting back in to my studio - enough talk, I want to get some mugs going!
Posted by Owen at 6:30 PM 1 comment:

I've had this idea for some time now, and have finally cleared off enough of my list of things to do and have posted a new mug - The Faith Mug. It's basically a Personalized Thumb Rest mug except that instead of a letter for the thumb rest, there are thumb rests of the major religions to choose from. I really like the look! 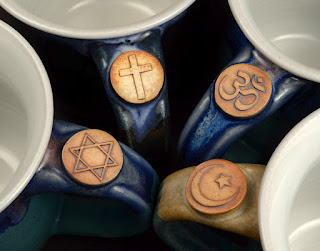 For pricing and ordering information click this link. To see the entire selection of mugs and mug products, go to Mug Revolution's home page.

I'm so very pleased to introduce the newest mug to the Mug Revolution lineup - please say hello to The Nurturing Mug! By no small coincidence, this mug is available in time for Mother's Day. Pre-orders will ship on April 21, 2012. (Here's the link to the order page.) Give a gift that Mom will enjoy and use daily!

I unloaded the kiln yesterday and as always felt about as alive as I imagine a rock climber ascending Monkey Face at Smith Rock does - terrified, exhilarated, on the edge - but fully, totally, absolutely ALIVE! It's not that I might slip and fall to my death. It's the thought that the previous month's labor and love may have been tossed over the cliff to the jagged rocks below by a mischievous kiln god.

I don't fully exhale until the last mug is out of the kiln, and I have had no major disasters.

Today is Sunday and I'm looking forward to a full day of packing up mugs that will make their way across Canada and the USA (and one to France) to their new homes.

Shown in the photo are two prize mugs for next month's Capitol Peak ultra marathon races in Olympia, Washington. 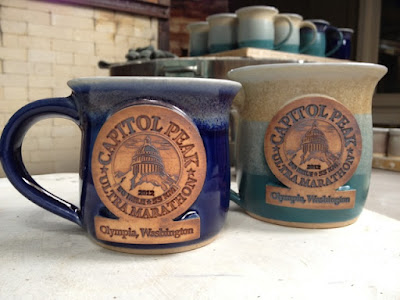