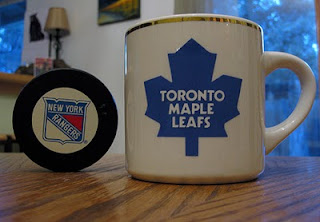 Susan and I first met in a bar.

It was spring 1993. My beleaguered and beloved Toronto Maple Leafs had somehow caught on fire, made the NHL playoffs, and knocked off two top teams and improbably had made it to the third round. Since I did not have cable, I realized that I was going to have to find a sports bar to watch what could have been history in the making, and so I found myself at the Irish Pub in Ashland, Oregon in the midst of a huge crowd of rabid basketball fans.

The Portland Trailblazers were doing extremely well that spring, and much to my chagrin, the three television sets in the bar were all showing the Blazers game. As I sipped my beer, I noticed that nobody was watching the tv in the middle of the bar. Everyone was watching the game on the sets at either end of the bar.

Summoning up my courage, I asked the bartender to switch the middle tv set to the hockey game. She was incredulous. "I'll get killed if I turn the Blazer game off!" she said. "Look around," I said. "Nobody is watching that tv behind you!" She looked at the crowd, leaned towards me and said "OK. I'll put it on hockey, with no sound. If I get one complaint it goes back to the Blazers game. Got it?"

Fortunately not a soul there noticed the game had been switched. By the end of the evening I had made several new friends who had also come in to see hockey. We started meeting at the bar to watch subsequent games, and one night a lovely gal came along with them. We have pretty much been together every day since we met all those years ago. Alas, the Leafs did not get the Cup that year, and it turns out that they have never come closer to winning it since then.

One Christmas Susan gave me a Leafs mug. Perhaps one of these springs I will fill it with champagne and raise a toast to a Leaf's Stanley Cup victory, though it's now looking more and more likely that  my days will be over long before the Leafs win the Cup again. Clearly, though, I owe the Leafs my loyalty for life - I never would have met the love of my life without their surprising performance in the spring of '93.

A year ago, I made Susan this personalized love mug and it's become one of her favorites. Last night, we watched a hockey game, and just before we went to bed Susan told me that she had been looking at my blog and thought that I should do a post on her love mug. So here it is Suz, a lovely mug for a lovely, lovely soul. 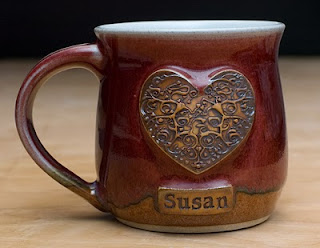