It is the last day of 2008, and as I look back on it, a very successful year for Mug Revolution.
Paw Print Mugs and Baby Handprint Mugs

At the end of 2007, I had had a frantic but rewarding ten weeks leading up to Christmas. The local paper had published a story about my business which made my phone ring off the hook, and brought me a lot of local orders, especially for the Paw Print mugs. Because of the interest in the Paw Print mugs, I was inspired to create a kit that allowed Mug Revolution to sell the Paw Print mugs online starting earlier this year. A few folks inquired about the possibility of using the Paw Print kit to make baby hand or footprint mugs...aha!-how interesting!...and soon we will be adding a new product to our line up of mugs.
Finally, I Can Relax!
I had truly thought that once holiday orders were filled in December 2007 that my business would slow down, and I was looking forward to a break. At the time I was working full time in a printing company, and the thought of having early mornings, evenings, and weekends free was wonderful--but it turns out it was just a thought.
A few orders had come in after Mug Revolution had either sold out or the cutoff date for the order to be filled in time for Christmas had passed. So, after a nice break to celebrate and relax with family and friends, I got back into the studio to finish the orders and get my inventory of stock mugs back up, thinking that I'd be able to take a break for a couple of months after the firing was done. Once I started making mugs, more orders came in--some of my local customers needed more mugs, more online orders came in, and pretty soon all of the kiln space for mugs was filled up, and I could only fit in a few stock mugs. This pattern repeated itself all year long, much to my surprise. I never did make as many mugs for stock as I wanted to, and in fact sold out of them in early December.
The Power of the Web
In June an online order came in for a couple of Paw Print kits and mugs. Noticing that the customer lived locally, I phoned to say that if she could come to pick up the kits and the mugs I would not charge her shipping and handling fees. She told me that she hadn't realized that we lived in the same town, and that she had been looking at mugs for her company's Christmas gifts later in the year, but saw the Paw Print mugs and got sidetracked. A month or so later, when she came to pick up her order, she said that she would be in touch soon to get a quote for her company's mugs. Well, I got the job, and made them over 250 custom mugs. They were very pleased and mentioned more than once that this was the best gift they had ever given...the folks who got them were really happy to have such a nice mug.
It occurred to me, all of a sudden, sometime during the time I was working on this order, that I never would have had a chance to know about the order unless I had a website. Even though Mug Revolution is in the same town as this company, the first thing they did to find handmade coffee mugs was to Google it. So, folks, if you don't have a website, get one. Best money you'll ever spend for your business.
Finally, I'm  A Full Time Potter!
On October 1st of this year, I was thrilled to be able to start a new phase in my professional life-that of a full time potter. Since getting into clay and quickly getting hooked in 1988, I've always dreamed of doing this. Now that it is a reality, I feel like the luckiest guy on the block.
A few months ago I had a few improvements made on my studio and hired Tim, a contractor we've worked with a few times over the years as we've done bigger projects on the house. I told him that I didn't know exactly when it would happen, but I was within a year or less of being a full time potter. Tim looked at me and said "A lot of people will be telling you how lucky you are to be a full time potter." I said something to the effect that I would be feeling lucky if, in fact, my dream did come true. Tim said, "They probably won't have any idea how hard you have worked over the years to make this happen. In my view there's not much luck involved. You worked for it, and you deserve the chance to be able to do it!"
I've thought about this from time to time, and you know, he's right. It's a lot of work. Those of you who have started a business know exactly what is involved. But it's more than that, and it doesn't always feel like work. It's being able to do what you are passionate about, to pour all of your energy into something that you believe in.
It sure makes Monday mornings a lot easier! Happy New Year, everyone. I wish you all the very best for 2009.
Posted by Owen at 9:48 AM 1 comment: 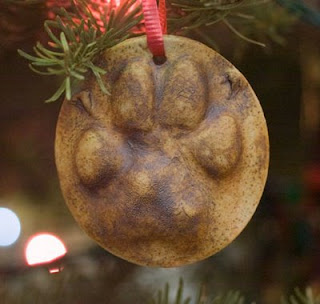 Sometimes you get an idea for the next greatest thing, and pour all your creative efforts and a lot of hard work into making the idea a marketable product. Other times, something falls into your lap. All that you are required to do is to recognize it when that opportunity presents itself.

Such was the case a few weeks ago, when making the paw print mugs on my order list. I normally will make all of the paw print mugs first, and fire them in my little bisque kiln which holds about 40 mugs. This way, if any of the mugs don't survive the bisque, I have ample time to re-make the mug or mugs so that the customer gets the mug on the agreed upon delivery date.

As I unloaded the barely warm bisque fired mugs from the kiln, I noticed something that I'd never seen before–the paw print medallion from one of the mugs had fallen right off the mug. Since the print was completely intact, I was curious about the paw print medallion, and wondered what I might be able to do with it. Being completely swamped with orders, and with a major deadline looming, I put it up on one of my shelves and promptly forgot about it.

Just as I was ready to start glazing the mugs a week or so later, my friend Dee stopped by the studio and gave me an ad from the newspaper showing a product that allowed a person to make a paw print Christmas tree ornament using the paw print from their pet. "You could do these, Owen," she said "but yours would be so much lighter and look a lot classier than the ones they are selling!"

I found the paw print medallion that I had put on the shelf and showed it to her. "That's it! Just drill a hole in it and you have a fantastic ornament!" So, I pulled out my drill, drilled a hole in the medallion, brushed it with iron oxide to make it look golden brown, put it in the kiln and subsequently fired it.

When the kiln was unloaded, I saw that Dee was right–this ornament really was cool. I've shown it to a number of folks in the past week and, perhaps not surprisingly, have already been getting orders for next year's Christmas.

It's really fun, the way that the Paw Print ornament came into being. It's been a lot of work, and a lot of trial and error in coming up with the Paw Print Kit and the Paw Print Mug, so in a way it feels like I've been given a small reward for all of that work.
Posted by Owen at 1:26 PM No comments:

It's a week before Christmas, and for Mug Revolution, it is time to wind down from the past three months of incredibly busy days, with very little in the way of days off. Not that I'm complaining–it has been amazing to be working with clay full time and to make a living at my passion.
This past Monday was incredibly cold, and I was quite scared to have to open the glaze kiln and unload it. The outside thermometer told me it was three degrees F. The kiln had been turned off at 3:30 Sunday morning, at a temperature of 2,320 degrees F. I was relieved to see that it was cooling down fairly normally, but still concerned that there was not enough time for the kiln to cool down completely before unloading. I did as much as I could in the studio (printing out mailing labels and assembling boxes) but finally had to face the fact that I was going to risk two weeks of work (which, under normal circumstances would have been done in four weeks) by opening the still warm kiln to the arctic air that had come for a visit.
To make a long story short, all went well with the unloading, and it was a good firing as well. You never really know until you open the kiln and see all the mugs, though by now I generally have a pretty good idea. Still, the kiln gods have the chance to have their say, and sometimes they do not see fit to produce things the way that you think they should have.
The rest of Monday was spent shipping orders, and all went well. Tuesday morning was the time for me to deliver mugs to my local customers. My wife Susan suggested I have them come to the studio to pick them up, but after ten weeks of being in the studio every day, the thought of getting out and saying hi to a few folks sounded really, really exciting!
Two of my customers did come by to pick up their orders. Both had ordered paw print mugs, and both were really pleased with the results. This, of course is something I don't often get, since most mugs go all over the US and other countries, seeing the reaction of my customers when they see their mugs for the first time. I do get lots of people who call or e-mail me with great compliments, and that is very rewarding, but to witness this "live" is special. When I told both of these folks something to the effect of "Well, you really will have a hit on your hands when you see these gifts being opened on Christmas day", both of them said "I am not going to wait until Christmas–I can't! I'm giving these right away!"
And so, there you have it, dear reader. The title of this post, after a long ramble, ties up neatly in the last sentence–happy customers, satisfied potter.
Happy Holidays!